This article was written by guest writer, KB.

As I approach a new semester, I’m usually bedeviled by the consternation regarding the difficulty of new classes and the imminent cessation of sentience outside work and school (if you’re confused by the precocious, albeit ridiculous, utilization of advanced “lexicon,” I’m studying for my GRE). At this point, however, senior year seems tantamount to child’s play. It’s no longer a question of finding my academic niche or proving myself competent in the mathematics department. With a proclivity for worrying about the future, the most pressing trepidations are related to what’s going to happen subsequent to my receiving a bachelor’s degree.

I know what would ideally happen. I’d get into the graduate school of my choice, get my PhD in mathematics, and someday start my career as a professor at a reputable university.

Since I’m not ignorant to the less-than-ideal workings of the real world, I can’t ignore my post-grad bugaboos.

Bugaboo: (noun) an object of fear. 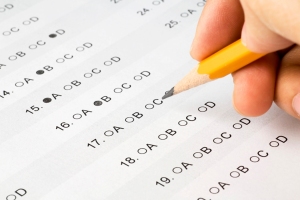 Yes, I know technically, you can’t fail the GRE. That won’t stop me from feeling like a failure if my score is insufficient for getting me to where I want to go. There are three sections of the GRE, much like the SAT: Verbal Reasoning, Quantitative Reasoning, and Analytical Writing. Since GRE scores are required by the majority of graduate schools, if you’re considering a master’s or doctoral program, GRE test prep is probably in your future. My advice is to take it slow, and start studying what seems like way too early.

Besides going through life as my normal information-sponge self, I’ve focused on two areas to prepare for the exam. A major portion of the Verbal section requires having a “college-level vocabulary” so, for the past month, I’ve been studying about 500 words a week from the reputable Barron’s GRE word list. From what I hear from other test takers, brute force memorization is the easiest and most effective strategy. You’ll need to recall definitions for the test, but likely never need to use these words again.

The most important targeted study area is the math subject test, which is separate from the general GRE. Four years of college math in one test;
pretty exciting, I know. Coming from a state school where a high GPA doesn’t hold the same weight as a high GPA from an Ivy League school, I’m feeling a lot of pressure to perform well on this exam and prove I know my stuff.

Feeling like I’ve worked very hard during my four years of college and being told that it wasn’t good enough: I imagine that would be a depressing experience. No one likes rejection, which is why I’m trying not to set my heart on one specific graduate school. Sometimes the key to happiness is
low expectations.

No matter what your post graduate plans are, we’re all living in the same economy with the same worries about our financial futures. With plans
to go straight to graduate school, I had my concerns about not entering the job market soon enough. It turns out the only expensive part of graduate school will be the application fees. As is true for most graduate programs in academia, mathematics PhD students are guaranteed financial support for at least five years as long as they remain in good academic standing and teach one or two undergraduate classes. These teaching assistantships provide on average a full waiver of tuition and a very generous living stipend, in most cases anywhere from $15,000 to $30,000. Therefore, putting myself through graduate school won’t be the kind of financial burden I imagined.

With qualifying exams, graduate classes, dissertations, and oral exams, the pursuit of my PhD seems daunting to say the least. After 17 long
years in the American education system, it is none too comforting to know at least another five lie ahead of me. I know I’ll leave graduate school with some kind of PhD: Permanent Head Damage.

What are your postgrad bugaboos?