If I Have Teenagers, They’re Being Shipped to Boarding School

OK, OK, I know that one does not have “a teenager” without first having a child. And before that you have the baby – I know how this thing works. But for some reason I never understood how a cute child could deform so horribly into the vacuous stomached, mood swingin’, attitude flinging, sex-craved, shoe throwing, demon-out-of-hell teenager.

That is, until I had to live with one.

My youngest brother, Michael, is sixteen. He’s a redhead (and the whole redhead = scary temper thing? It’s absolutely true). He’s also a lazy night owl with no sense of responsibility. He won’t do dishes because he’s terrified of touching any left-over food. He gets huffy if anything you ask him to do outside takes longer than fifteen minutes – it’s like he’s afraid of the outdoors. And he fights me on everything.

Back in June, I argued with him for an hour about getting out of the house and going to the beach. What follows is the brunt of our conversation, repeated and rephrased at least thirty times.

“You loved it when you were three.”

“You never listen to what I want.”

“You’re not staying here. I’m asking you to do one thing this summer – one thing. Go to the beach with us.”

“Yea, well if we have a car accident on the way there, and I’m the only one that dies, you’re going to regret making me go.”

“If I leave you here and a psycho murderer breaks into the house and kills you while I’m gone, then I’m going to regret leaving you here. Get ready.”

“I’ll kill him before he kills me.”

Never mind the flaws in his logic (what’s he going to do, throw his DS at a potential psycho?), arguing with Michael is like arguing with Swiss cheese – it goes through the holes, bounces around, comes out the other end and remains completely unmoved.

I have to be on his case about putting his clothes away, keeping his room neat, taking showers (the boy went two weeks following the fourth of July without bathing), and going to bed at a reasonable time so that when his friends call at two in the afternoon, he’s actually awake to hang out.

When did I become his mother? And, more importantly, when will he stop smacking me with his slippers when he doesn’t like what I say?

Teenagers. My Mom thinks she’s sneaky, but I figured it out. That’s why learning experience #4 as an SHD: Someone else can raise them.

Am I overreacting? It’s very likely. Michael has his good days, and his days when he makes me laugh – like going on about what voice actor did what character – I have no idea what he’s talking about, but I love that he’s so passionate about voice acting. And OK, so maybe the teeanger isn’t as frightening as I first made it sound. Besides, he’s almost seventeen, and he’s already mellowed out so much since this teenager business first started. It can’t last much longer, right?

Still, if both my parents made it through all of our teenager years, they may have more balls than I give them credit for. Or than I do, for that matter (but, you know, I’m a girl). 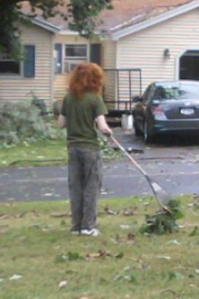 He didn't last long outside